Most ribbons made by Slate on toyhou.se (linked)! Hover over the ribbons for explanation.

Has a lot of military training, courtesy of his father, who pretty much pressured him into it since he was very hungry for conquest on other planets in their solar system. Cross wanted nothing to do with his father’s war and ran away after years of waiting for an opportunity to do so. Would most likely be severly punished if he went back.
Did participate in the war for years before running away, and has several scars from it and his training.
Tries to stay away from his original family as much as possible.
Used to be a guard in the prison Killer, Dust and Horror were in, after running away.
Followed them and tried to ‘keep an eye’ on them when they escaped, but ended up befriending them instead.
Doesn’t really talk to anyone about his past before he became a prison guard.
Has a lot of trauma from his past.
Very serious and intimidating, it’s hard to get him to relax.
Has started relaxing a bit thanks to the murder trio and the others.
Taught Killer how to carve wood.
Witnessing any genuine aggression causes him to immediately go into military/combat mode.
Doesn’t like being touched unexpectedly or by strangers.
Can’t stand any sort of intentional degredation/humiliation.
Studied psychology for some time (not a professional by any means, but understands some things and often helps others where he can).
Smokes when under high stress.
Pretty much single-handedly disbanded a streetgang.
Works as a security guard nowadays.
Has a very nice singing voice.
Would love to have a big family some day, but at the same time is afraid to get one.

Being touched unexpectedly or by strangers
Intentional degredation/humiliation
His father

Healing Magic
Has quite strong healing magic. Can heal even pretty bad wounds.

I didn't write down the year on her original ref (on paper), so I'm not entirely sure about what year I created her, but 2013 is the estimated year. 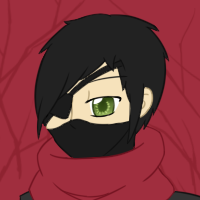 Started crushing on him some time after they met.

Frey's thoughts on Shadow
"He may seem all distant and cool, but he's really a big sweetheart! ♡"

Shadow's thoughts on Frey
"She's... very kind, yet won't take shit from anyone...and so skilled and strong and independent... ///"

What's their dirty talk like? How they feel about being talked dirty to?

Is it easy or hard for them to achieve orgasm?
What are their orgasms like? Scream/tense up/etc?


Their sexual dynamics go here.
Who tops?
Are the kinky or casual?
Are they rough or gentle?
How's the aftercare?


How was their first time together?


Notable sexual endeavors so far?
How has their relationship sexually advanced since their first time?
Are they more comfy with each other now?
Have they tried out new things since then; how did that turn out?